There’s a garbage strike going on here in Toronto. But we Torontonians just don’t like littering (I’d like to think). So these people were just so determined not to pollute the environment that they took the heroic effort of tugging loose the thick, sticky, strong tape to put their garbage anywhere but on the ground. Here’s some of the garbage cans (well, they’re not cans, but I don’t know what else to call ’em) I came across while venturing the streets downtown. 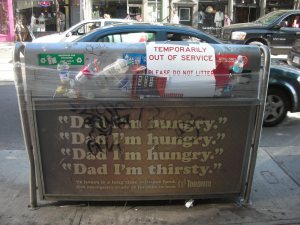 Not very funny? Well, my sister and I were cracking up when we saw these and attracted a fair amount of attention.

And speaking of garbage….. This is just something I wrote on facebook, and thought to repost my comment here, because it’s TRUE:

Reduce, Reuse, Recycle–this is what a lazy writer does, pillaging through her older works to find passages she might use for her current project (….is it just me who does this?!)