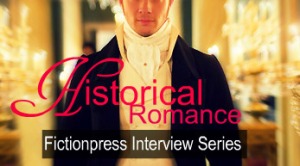 FictionPress is a growing network of over 1 million writers/readers,
and home to over 1,200,000 original works.

1. Tell us about yourself!

I’m a twenty-year-old aspiring author who refuses to tell anyone her real name. I wrote my first book at the age of seven, self-published it with illustrations and sold it to my sister for a quarter. I never thought I’d turn to writing as a career, in fact most recently went through a phase where I chose to brood and pose like Hamlet near windows, while loudly reciting “To write or not to write…”

2. What is your novel about?

As of now, I have two things to be proud of. Firstly, my first full-length novel, Masquerade, is complete. For those of you not familiar with it, here’s a synopsis:

Hidden secrets. A possible murder. Matchmaking grandmas. Scandalous, well, scandal. And last but not least, the romance of a lifetime. Let the masquerade begin!

Lucien Castello, a former student of Oxford and the heir to a weathly dukedom, has been ordered to commit the most grevious of deeds…GET MARRIED! To make matters worse someone has been sabotaging his secret empire. Really what’s a man to do?

She is Lucien’s every wish fulfilled and the perfect wife to boot…only she refuses to surrender her independence for anything! Jade knows that marrying Lucien would mean revealing the very secrets she has worked to hard to conceal, yet the young duke-to-be is proving far more persistent that she would have imagined.

And so the masquerade begins…

I had so much fun writing Masquerade and working with the characters of Lucien and Jade was a blast. I’m going to miss working with them as the focus of the story, but that hasn’t stopped me from looking forward to writing the sequel, Midnight Phantom.

But all that doesn’t start until my second biggest project is underway. So announcing…drum roll please…the first ever Regency ezine! I’m proud to say that the Regency Times, will be a free ezine available to anyone with an internet connection. It’ll feature fashion from the time, book reviews, interviews with aspiring authors, character interviews and more! This is great project that me and my editor, Illiana, cooked up when I announced that Damon would make a great cover model.

And don’t forget folks, you read it first on June’s blog!

3. What inspired you to write this story?

Masquerade was my answer to a reading dry spell. A few times while reading a book, I would get so disappointed by the way things were going that I would put it down and never pick it up again. Of course, this meant that I was rapidly running out of reading material. So I decided I should write my own book, one that would interest me enough to read till the end and one that wouldn’t disappoint. And, naturally, it had to be a comedy.

4. Where are you in your journey to publication?

Currently, I’m stuck in the dreaded querying process. Being the perfectionist that I am, I’ve written and rewritten my query letters a dozen times, now it’s a matter of getting them out to the literary agents.

Ah, the million dollar question. I would have to say that my favourite books, or for that matter any books that I like, would have to be the same ones that inspire me to write. Julia Quinn’s “How to Marry a Marquis”, Johanna Lindsey’s “The Magic of You”, Sherrilyn Kenyon’s “Dance With the Devil”, Jane Austen’s “Pride and Prejudice”, and J.D. Salinger’s “The Catcher in the Rye.” These books taught me that good books break conventions, have unlikely heroes and sometimes, bad guys are allowed to win!