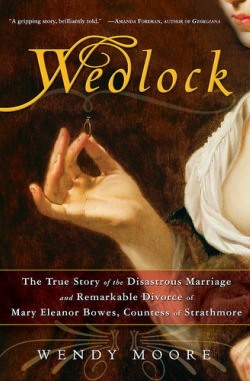 “Based on meticulous archival research, Wedlock is a thrilling and cinematic true story, ripped from the headlines of eighteenth-century England.”

I was browsing through the bookstore, in the biography section (I’ve had a biography fetish ever since I read my all-time favourite The Duchess by Amanda Foreman, which I reviewed), when I came across the biography of Mary Eleanor Bowes, Countess of Strathmore. The title rung familiar. And I realized it was because I’d once read a fascinating article about her sent to me by M.M. Bennetts. Wanting to learn more about divorce in 18th century England, and as this book was heavily based on it, I bought it without a second thought. And, when I closed this book, after having read the last page, I am SO glad I did buy it! This is one of those books that not only offer insight into the Georgian era, but into human nature, and how depraved it can be. I have learned so much from this book. Lesson number one would be: Choose your husband’s wisely.

With that said, I was quite disturbed by this biography. I have never hated a historical figure, or character, so much as I did the tall and handsome Captain Andrew Robinson Stoney. He truly was a disgrace to humankind. A monster in the form of a man. At moments, I was so enraged by his conduct that I had to put the book down for a few seconds, so I could calm myself down. Fifty years after Stoney’s public downfall, the grandson retold Stoney’s heinous crimes to William Makepeace Thackeray, and it was what inspired him to write Barry Lyndon, modelling the anti-hero on Stoney.

Stoney, hungry for wealth and power, deceived an heiress into marriage. She died soon after—a death probably hastened by his mistreatment. He then fixed his eyes on his next victim, Mary Eleanor Bowes. One of the wealthiest heiress in England, she was beautiful, highly intelligent, and had a bright future ahead of her as a writer and botanist. Stoney began wooing her, but though flattered by his attention, she was already engaged to another. This did not deter him from his purpose. When articles appeared on the newspaper slandering Mary Eleanor, Stoney bravely declared his determination to fight for her honour. This won her heart immediately. So when Stoney got wounded in the duel, for her sake, Mary Eleanor was moved by this romantic act, and agreed to marry the poor, deathly-pale soldier before he died. But once they married and all her wealth had legally transferred over to Stoney—he began to miraculously recover.  It turned out that the whole duel was a SHAM!

From day one of their marriage, Stoney dropped all pretence, and his true character immediately emerged. He began beating, kicking, and pinching her. He would shove his finger into her ears until it bled. He would beat her with the hilt of his sword. He would threaten her with a knife. He even once shoved her face against the flame of a candle. All this violence against her—unprovoked. The years went by and the energetic, flirtatious girl turned into a frightened, depressed wife:

She was pale and nervous, and her under jaw constantly moved from side to side. If she said anything, she looked at him first. If she was asked to drink a glass of wine, she took his intelligence before she answered (193).

Confined to her home where all the servants were spies, where all her letters were intercepted by her husband, and where she was

MOTHER’S PRIDE: Mary Eleanor Bowes portrayed in maternal mood with one of her daughters, during her first marriage to the 9th Earl of Strathmore

unable to tell anyone of her situation, for fear of being beaten, Mary Eleanor was cut off entirely from the world she once belonged to.

It is only when Stoney made the mistake of hiring the widower Mary Morgan into his service as a maid that his wife’s miserable life came to a turning point. The educated, religious and strong Ms. Morgan noticed the bruises on her mistress and the indiscrete philandering of the master (he seduced maids, raped virgins, and impregnated and abandoned all). While the other servants, in fear of their master’s wrath, casted a blind eye to this violence—Ms. Morgan remained un-submissive to both his charm and fury. Whenever she asked Mary Eleanor about the bruises, Mary would lie, saying that her bruises were from her own clumsiness. But, one day, when Stoney was infuriated just by the sight of Mary looking down onto the garden forbidden to her, he clawed the skin behind her ears off. Blood flowed endlessly. So while Ms Morgan came to tend to her, Mary’s reserve finally broke down. By confiding in Ms. Morgan, telling her about her husband’s violence and infidelity, Mary found in this maid an ally (and the best of friends who would remain by her side until her death). Ms. Morgan and two other newly hired maids came to join in secret allegiance to support their mistress Mary in a household oppressed by the ever watchful eyes of servants that would always report back to Stoney.

Without a son, Mary remaining alive was crucial to Stoney, as her death would mean for him to lose all his wealth and estates. This was because the Strathmore fortune was in his possession for only as long as she lived. But when Mary finally gave birth to an heir, Stoney knew his fortune was secured, and so his violence towards Mary escalated. She knew that he was bent on murdering her when he “calmly” informed her that “he had accumulated so many annuities and insurances on her life that he would be better off if she were dead” and “revealed that he had yet another rich heiress in his sight” (222). Afraid for her life, Mary, with the help of her faithful maids, managed to escape.

Once out of Stoney’s clutches she filed for divorce.

All the odds were against Mary Eleanor. And Stoney was determined to win, because to lose, to get divorced, meant for him to lose everything. And here begins her intense legal battle for divorce—my all-time favourite part of the book. Witnesses vital to Mary’s case, Stoney bribed, threatened, or kidnapped. He bribed, deceived, and schemed—using ALL that was within his power to win. Yet in a male-oriented justice system, in a society where wife-beating was legal, Stoney’s depraved conduct scandalized everyone. As the tide turned in favour of Mary Eleanor, Stoney kidnapped her, and headed desperately towards Scotland, so that from there he could confine his wife in Ireland—where her lawyers would have little hope in rescuing her.

Andrew Robinson Bowes Esq. as he appeared in the Court of King's Bench, on November 28, 1786 to answer the articles exhibited against him by his wife, the Countess of Strathmore

One of my favourite scenes shows how much Mary has changed from the submissive, trembling, constantly frightened wife to a brave woman:

Bowes grabbed Mary and pointed his pistol at her breast, then threatened to fire unless she consented to live with him again as his wife…Mary was defiant, refusing to comply with his demands, even at gunpoint…Bowes calmly informed her that he was determined to shoot. When he ordered her to “Say your prayers!” Mary did just that. Closing her eyes, she declaimed, “I recommend my spirit to God, and my friends to his protection—fire!” Mary heard the trigger being pulled and waited for the fatal blow, but the gunpowder failed to ignite, probably owing to the damp conditions of the journey. Demented with rage, Bowed punched Mary twice so that she fell to the floor, her head pounding so much that the room seemed “in a blaze of fire.” Towering over her, Bowed demanded to know whether she had had enough, to which Mary retorted, “not the thousandth part enough; you may shoot me, or beat me to a mummy: my person is in your power, but my mind is beyond your reach.” At that Bowes threw his ineffectual pistol aside and exclaimed in evident awe, “By God you are a wonderful woman” (262).

Throughout the journey, in which Mary Eleanor nearly died from hunger and cold, he continued to beat and threaten to rape her.

“News that the Countess of Strathmore had been abducted in broad daylight from one of London’s main thoroughfares spread rapidly through the streets of the capital and ultimately traveled even as far as India.” INDIA! Seriously?! THAT far?! From here on everything became highly dramatic. Impressively so. I thought I was watching a movie, seriously. In fact, my fingers trembled, eager to turn to the next page, and read what would happen next.

A Habeas Corpus was obtained from the King’s Bench court for the return of Mary Eleanor Bowes. Officers from Bow Street, sent to rescue her, along with a swarm of farm workers, all gathered around the castle in which Mary was being confined. By this point I was laughing like crazy. I wouldn’t have been surprised if those farmers were holding pitchforks, and officers preparing cannons, determined to attack the castle walls. The fact that this actually happened blew me over. I was super giddy while reading, for some odd reason. ANYWAY, the whole legal drama continued on for years and years, and whether or not Mary Eleanor Bowes won the case . . .

I’ll leave it up to you guys to find out by reading this amazing biography!

So excited to share that THE RED PALACE is now available for request on NetGalley and Edelweiss!
*Signup Form for THE RED PALACE eARC*
Pass pages of THE RED PALACE arrived in my inbox this morning and I am ECSTATIC.
Hwani and Maewol from THE FOREST OF STOLEN GIRLS by Leeann/Cube 🥺💕
I asked in my stories for IG post prompts and I received so many! I'll be answering them one by one, and the first question is: Resources about Ancient Korea (and I'm going to assume the writer is searching for English resources).
🔊 Sound On
'The Forest of Stolen Girls' OutApril 20, 2021
Published!
Loading Comments...
Comment
×
%d bloggers like this: