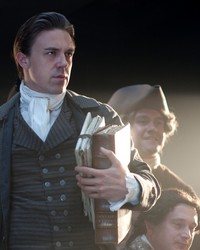 Sir William Garrow (13 April 1760 – 24 September 1840) was a British barrister, politician and judge known for his indirect reform of the advocacy system, which helped usher in the adversarial court system used in most common law nations today. He introduced the phrase “innocent until proven guilty”, insisting that defendants’ accusers and their evidence be thoroughly tested in court.

I finished watching the 4-hour long series Garrow’s Law. It’s an intriguing courtroom drama that offers insight on how crimes were dealt with during the Georgian era. Also, we are given a new hero to drool over. Though Garrow is not the best looking gentleman I’ve seen onscreen, he is certainly not without his charm. His wit, intelligence, and hunger to reform the legal system makes him all the more endearing.

It was interesting to observe how heavily influenced the legal system was by politics (rather than law and principle).

It was also fascinating to learn about how outdated the legal system itself was. So outdated that it will shock and amuse you.

For example, lawyers would actually make a case by reaching back “hundreds of years” to “twist a law to their particular use” (says Garrow in a episode 2).

In one episode, a key defense used in a case was a strange statute from 1721 which “protects the damage of clothes by disgruntled weavers angry at the importation of cloth from abroad. The punishment for this crime is hanging”. So Renwick, a man accused of having slashed a woman with a dagger, could be sentenced to death for “damaging” her “clothe”. But when Garrow proves that his client Renwick attempted murder rather than merely trying to damage her clothes, the statute makes the attack a “misdemeanour” and therefore not a hanging offense.

The last episode was my favourite. It was filled with such drama and suspense! All the best legal minds are against Garrow in the case that will determine his rise or fall, as he chooses to defend a man charged for high treason.

I was at the edge of my seat throughout! And the outcome of this trial was just….just…AMAZING!

For anyone further interested (and morbidly curious, like myself) with the legal system during the Georgian era, in 1765 the judge could hand out the death penalty for the following offences:

While researching, I also came across a passage that shocked me. While it takes place in the period after the Georgian era, which is the focus of this entry, I wanted to share it anyway, knowing as there are many Regency Era-fanatics out there:

The scaffold was surrounded by a great force of cavalry with drawn swords. The crowd gaped as if in a stupor. It was November 1, 1817, and it was time for Jeremiah Brandreth to be executed for having taken part in a conspiracy to overthrow the government of England. The infamous executioner Calcraft slipped the noose around Brandreth’s neck, then quickly sent him swinging.

That was not the end of it.

Brandreth was cut down after half an hour, still not dead, since in those days hanging caused death through strangulation, not through breaking the neck as is the case today. He was carried to the block, where the executioner took one mighty swipe with an ax which had been ordered specially for the job. But his aim was not true, and he only partly severed the head. His assistant finished the job with a butcher’s knife. Then Calcraft laid hold of the hair of Brandreth’s bloody head and raised it high, first to the right, then to the left, crying out as was required by law, “Behold, the head of a traitor, Jeremiah Brandreth! ”

The crowd went wild, running hysterically in all directions.

Ehm, I thought I was reading about the Medieval era here. But nope.

I’ve always been a Loreena McKennitt fan. Recently, I was listening through my old playlists and rediscovered my love for her songs. Her voice always draws me back to the days of old; her lyrics never fail to move my heart. Here are two of my fav pieces by her:

(This piece is heartbreaking and romantic):

P.S.S. And also be sure to drop by Kim’s blog. She’s a fantastic writer who has been a big encouragement to me throughout the years I’ve been working on TRC.