Note: If you don’t care to read about my Oliver, scroll down to check out the movie poster of an upcoming period movie!

1) I’m researching for a major paper and came across one of the many rare books at my university (can’t wait to touch ’em all *creepy laughter*!). It contained pages so brown with age that I had to be careful as I flipped through, as the paper would literally break between my fingertips. I was enchanted.

The thought that I was holding within my bare hands a book published in 1852…meaning that 158 years ago another person had held this very book… To be exact, that other person had been OLIVER. My heart fluttered reading this name. I became curious about the hand, the MAN, who scribbled down his name. With a quill pen.

2) Books I’m dying to get my hands on after the deluge of essays and readings comes to an end. Maybe during the winter break:

Yes, they’re all historical  fictions. And yes, I’m having a Historical-fic-fetish of late.

To be considered historical, rather than simply a costume drama that uses the past as an exotic setting for romance and adventure, a film must engage, directly or obliquely, the issues, ideas, data, and arguments of the ongoing discourse of history. Like the book, the historical film cannot exist in a state of historical innocence, cannot indulge in capricious invention, cannot ignore the findings and assertions and arguments of what we already know from other sources. Like any work of history, a film must be judged in terms of the knowledge of the past that we already possess. Like any work of history, it must situate itself within a body of other works, the ongoing (multimedia) debate over the importance of events and the meaning of the past. 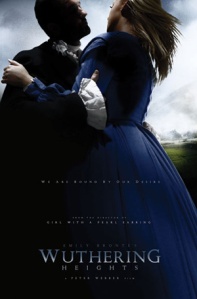 3) Check out this poster for the upcoming movie WUTHERING HEIGHTS (2011). “Lindsay Lohan campaigned for the role [of romantic heroine Catherine Earnshaw] but...” another actress replaced her. And then that replacement was eventually replaced. And replaced again. And now I’m not quite certain who the role was given to. Anyway…uhh….thank goodness Lohan didn’t get the role? I can’t imagine her playing the lead role in a PERIOD MOVIE. Maybe it’s because I’ve been exposed to so much bad press about Lohan on tabloids while waiting in line at grocery stores. So if I saw her on-screen as Catherine Earnshaw…I would not see Catherine Earnshaw but the celebrity-in-rehab-and-in-court-and-in-court-again. Gee, I remember the good old days when she was in Parents Trap….

Here’s a photo of Mia Wasikowska (she played Alice in…Alice in Wonderland) from the new JANE EYRE (2011) adaptation! Another adaptation that’ll hit theatres next year. I can see a bit of Alice in Ms. Eyre, peeking into the room without knowing that she’ll soon be tumbling down into a world of romantic madness!

17 thoughts on “HISTORY!!! Now that I have your attention…”

So excited to share that THE RED PALACE is now available for request on NetGalley and Edelweiss!
*Signup Form for THE RED PALACE eARC*
Pass pages of THE RED PALACE arrived in my inbox this morning and I am ECSTATIC.
Hwani and Maewol from THE FOREST OF STOLEN GIRLS by Leeann/Cube 🥺💕
I asked in my stories for IG post prompts and I received so many! I'll be answering them one by one, and the first question is: Resources about Ancient Korea (and I'm going to assume the writer is searching for English resources).
🔊 Sound On
'The Forest of Stolen Girls' OutApril 20, 2021
Published!
Loading Comments...
Comment
×
%d bloggers like this: