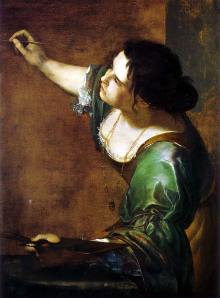 1) Sorry for my absence in the blog sphere! A million pages of readings and a millions essays have taken up most of my time. But I did do some brainstorming for the revision of Fall of the Sparrows. I decided that I needed to develop Lenore’s side of the story more. As it is James (the hero) has stolen the spotlight and Lenore is just…there….for the sake of his character arc.

In this new version, I’m planning to add more focus to Lenore’s passion for the arts. Since she was a child, she worked as a servant for a well-reputed artist—an artist who was one of the few women accepted into the Royal Academy in London [I’m still not sure whether to make this woman a ficticious or real character]. It was through this kind woman that Lenore also discovered her love for painting. But after the death of her mistress, Lenore is recommended into the service of the Duke’s household. There, as a servant, she is meant to be an invisible entity to her superiors….but, to the shock of all, she gains the favour of the heir apparent with, at first, her surprising artistic skills, and later her kind heart.

As you can see, with both The Runaway Courtesan and this story, I’m a sucker for these great social divides between a hero and heroine. Of course, I will keep the servant-master relationship as realistic as possible. I’ll try not to turn this into a story like Pamela by Samuel Richardson (a classic story about a gentleman who falls in love with his maid, kidnaps her, tries to seduce her, and in the end, failing to do so, marries her). I borrowed a stack of books from the library, secondary and primary sources, and after some researching, I was completely captured by the dangerous and unfortunate world the servants lived in:

….the very nature of servants’ quarters contributed to their vulnerability – often they were mere spaces on landings or virtual cupboards without windows or, sometimes, even doors ….if given room, small attics. Quarters could never be locked. Housekeeper kept the keys: servants had to be accessible at all times, privacy was not for them

“…going to bed, the maid’s room and bed facing the stairs as I came up, she in bed and the candle burning, I could see her at different times uncovered…very tempting to a man, for she was a pretty young girl….” The only action he took was to give her a lecture on the danger of going to sleep with the candle still alight.

While I’m adding more chemistry between the hero and heroine, and while I’m adding a more romantic flare to this story, FOTS is still more of a family focused story. The hero’s side of the story, which is his broken relationship with his father, will have the dominant focus.

2) I was at the coffee shop from 2pm until 11pm. I told myself, when I first arrived, that I wouldn’t leave until I finished reading the book–Monkey Beach by Eden  Robinson–which I had to write my English paper on. I didn’t REALLY mean to stay until finishing, of course. Reading the remaining hundreds of pages at a coffee shop? In one sitting? Possible…but….I knew I wouldn’t be surprised if I just got up and left without finishing. I thought that I was, as usual, being over-ambitious. But ohmygosh the book turned out to be so, so, so,  SOOOO good after the first half that I couldn’t stop reading. After a cup of tea and then coffee and an oatmeal cookie later, I closed the book, and stared blankly ahead with my heart going a-flutter. It was the best book I read this school year. And it was THE BEST coming-of-age story I’ve read in my entire life. I don’t remember reading a book that made me laugh so much, smile so stupidly, or feel my heart ache so badly. Seriously,  a great book.

Lisamarie Hill, the protagonist of Eden Robinson’s coming-of-age novel Monkey Beach, is a terror. She’ll run out of an evacuating car to get a better view of a tidal wave. She’ll drag you unconscious to a deserted island with nothing but cigarettes, marshmallows, and the need to get you talking. Whatever her age, she’ll ask awkward questions.

Set in the coastal Haisla village of Kitamaat near British Columbia’s dauntingly gorgeous Queen Charlotte Islands, Monkey Beach is the story of Lisa and her Haisla community, including uncles involved in First Nations warrior movements, industrious grandmothers with one foot in the grave and the other in various spirit worlds, and the long-armed specter of residential schools. The path to adulthood (and you risk a bloody nose if you call Lisa an adult) for Lisa and her friends is beset by the dangers of substance abuse and family violence but sprinkled with hopes as varied as Olympic gold or, sadly, a “really great truck.” 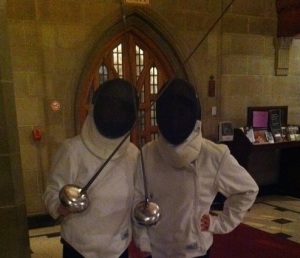 3) It’s been my dream for years [well, ever since I saw Mr. Darcy fencing in the ’95 adaptation]

to learn how to fence. Then, lo and behold!–Alex, from our writing group, told us about this free fencing class being offered at our university. We joined, and it was so awesome. After about 40 minutes of learning the basic moves, we went out into the hallway of Emmanuel College to practice fencing. It was so epic. I was all giddy, hearing the rapiers clashing, echoing against the stone walls. *swoon* We’ll be going every wednesday to learn. Some of us are also going for the sake of our writing–how great is it to actually experience what we write about, fencing duels and all! *nerdy grin*

Did you ever go out of your way to experience first-hand what you plan on writing about? Here’s my list of activities I have and have yet to experience.

4) The song I recently discovered and fell SO MUCH in love with. Brought tears to my eyes.

11 thoughts on “June, reporting live from the writing-front”