In my research, I came across an interesting book (circa 1850) that lists London’s prostitutes, identifying them by name, location, and their special charms. It’s possible to forget that we’re reading about women with a heart and mind of their own, because the way in which they’re described is so objectified.

“…a good complexion, and a fine bloom on her cheeks, but never makes use of any art…”

“…breasts [that] are rather small, but as plump and hard as an untouched virgin’s..”

When describing how these women feel about their profession,  the explanation goes along the lines of: “her life is not worth her care without the thorough gratification of every pleasure.” Prostitution, in other words, allows women unlimited access to their one and only desire: pleasure. Men are therefore assured that there’s no need to feel guilty in seeking out their sexual service. 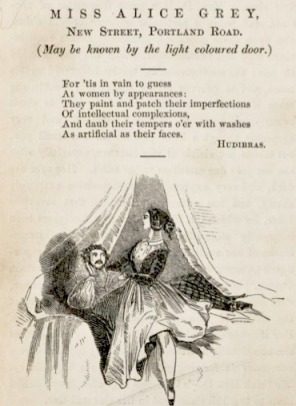 But in introducing these prostitutes, the author leaves out one important factor: the reality. Many prostitutes had to deal with sexually transmitted diseases, fickle-hearted patrons/abandonment, abortion, abuse, depression… etc., Life was not always entertaining, glamorous, and pleasurable.

It’s therefore unsettling to read about women as being no more than objects with good teeth, pretty legs, and plump breasts. There’s so much more to ‘fallen women’ than their bodies, but we’re not told their stories, because they’re not given a voice

. They don’t deserve a voice (or so the Victorian misogynists believed). They were wicked creatures, lesser humans, unnatural, insane…

On a similar note:

In the current manuscript (TRC) I’m working on, my heroine, Amanda Hollingworth, is one of the women listed in the ‘book of prostitutes’. But I give her a voice, so she has a story to tell, and, at present, I’m a little past the half-way point of her life’s story.

I want to write faster (because I really want to share this story), but life has gotten busier after graduating from university. My days can be summarized by this Facebook status of mine:

The 2021 shortlists for the @kidsbookcentre Book Awards honour the breadth of Canadian books for young people, and I'm so thrilled to share that THE SILENCE OF BONES was nominated for the Amy Mathers Teen Book Award! 🎉
🔊 Sound On.
Hello hi I'm screaming. THE SILENCE OF BONES will be published in Russia, and look at its stunning cover 🖤
I've been hard at work on A CRANE AMONG WOLVES and it's felt like quite the task! Sometimes this story feels too challenging to write, but then I get these moments of utter joy and thrill as the story comes together. It's the feeling of finally reaching one peak, and I get to catch my breath and enjoy the view for a bit.
Thank you @wednesdaybooks for sending me the promo box for @adrienneyoungbooks THE LAST LEGACY! Along with the gorgeous book, this box came with tea leaves & a bag of dice & a temporary tattoo, and I'm so curious to see these pieces show up in the story 👀
I'm trying to think of all the historical k-dramas tropes that I love so I can find a way to squeeze it into A CRANE AMONG WOLVES.
'The Forest of Stolen Girls' OutApril 20, 2021
Published!
Loading Comments...
%d bloggers like this: