The Story Behind My Artwork:

I, Miss Bluestocking, was commissioned by well-to-do parents to paint a portrait of their son, Lucas Creswell. He was a young man, 20 years of age, when he first sat down for me and my brush.

I was initially intimidated by his brusqueness but quickly warmed up to him. He was surprisingly humble and unaffected despite his privileged upbringing.

When I revealed the completed portrait to the family, let’s just say the Creswells did not look too pleased. They were expecting something more along the lines of classic realism than impressionism.

There were other issues with the portrait.

Lucas Creswell asked in a solemn voice, “Why, madam, do I have a moustache?”

I expelled a tragic sigh. “My hands, good sir, shook while trying to paint your lips!“ 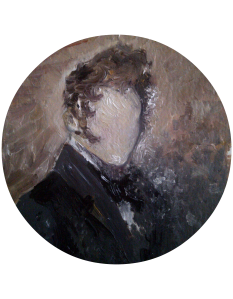 But the Creswells were still kind to me despite their disappointment.

To this day I am still well-acquainted with Lucas Creswell. We have kept up a correspondence for many years. He is now in his late twenties and is the magistrate of Devonshire.

But when he isn’t busy wielding undisputed power, fixing wages, building and controlling roads and bridges, I often find him taking long walks with his most intimate friend, Miss Amanda Hollingworth. An uncanny young woman with inky brown hair and a crooked smile.

I wanted to take a few hours’ break from writing. Didn’t know what to do. So I oil-painted my story to life.

The sketch behind the paint

Painting always reminds me of writing. Draft by draft, brush stroke by brush stroke, we layer the story until it’s completed.

8 thoughts on “Oil-Painting the Character from My Manuscript”

The 2021 shortlists for the @kidsbookcentre Book Awards honour the breadth of Canadian books for young people, and I'm so thrilled to share that THE SILENCE OF BONES was nominated for the Amy Mathers Teen Book Award! 🎉
🔊 Sound On.
Hello hi I'm screaming. THE SILENCE OF BONES will be published in Russia, and look at its stunning cover 🖤
I've been hard at work on A CRANE AMONG WOLVES and it's felt like quite the task! Sometimes this story feels too challenging to write, but then I get these moments of utter joy and thrill as the story comes together. It's the feeling of finally reaching one peak, and I get to catch my breath and enjoy the view for a bit.
Thank you @wednesdaybooks for sending me the promo box for @adrienneyoungbooks THE LAST LEGACY! Along with the gorgeous book, this box came with tea leaves & a bag of dice & a temporary tattoo, and I'm so curious to see these pieces show up in the story 👀
I'm trying to think of all the historical k-dramas tropes that I love so I can find a way to squeeze it into A CRANE AMONG WOLVES.
'The Forest of Stolen Girls' OutApril 20, 2021
Published!
Loading Comments...
%d bloggers like this: