Summary: In late 18th-century, Ross Poldark returns to his Cornish tin mines after spending three years in the army to avoid charges of smuggling, leaving behind his sweetheart Elizabeth. On his return, having fought in the American War of Independence, he finds his father dead, his estate in ruins and Elizabeth engaged to his cousin Francis. In need of help he takes on a new kitchen maid, Demelza, after rescuing her from a beating bringing him into conflict with hostile locals.

The episode opens with Ross Poldark fighting a losing battle in the American Revolution. When the war ends, he returns to Cornwall, England, with a scar on his face and a wounded leg.

During the journey home, he pretends to be asleep while he listens to the whispers among people who have recognized him. Ross learns that his father–the libertine–is dead, and that he has inherited the ancient Poldark land. 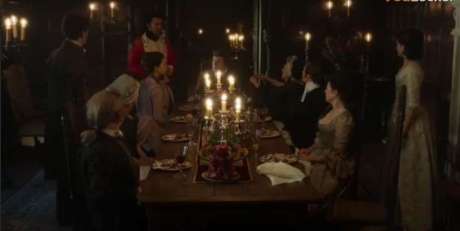 Wanting to announce his return from the war, Poldark walks into a dinner gathering at Trenwith House and is overjoyed to see his sweetheart, Elizabeth.

But he soon learns that the dinner is in celebration of Elizabeth’s engagement to Ross’ cousin, Francis. Her excuse for betraying Ross is understandable: ‘But I thought you were dead!!!’

Now that Elizabeth realizes her mistake, a look of remorse crosses her face, and one gets the sense that she never stopped loving Ross. Too late now. 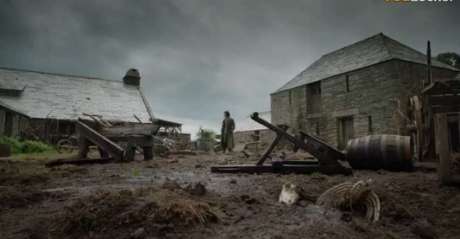 Trying not to think of Elizabeth, Ross keeps himself busy. He is determined to make a livelihood from his rotting Nampara estate. His tenants assure him that they’re willing to work for Ross even without pay. It’s clear that the tenants deeply respect him. 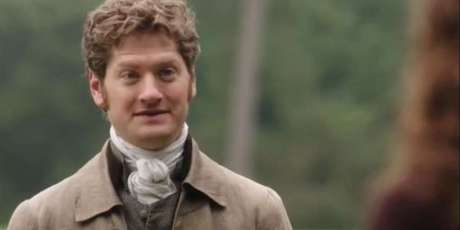 Meanwhile, Elizabeth waits at her home for Ross, hoping to explain to him why she betrayed him. When she hears the rumbling of carriage wheels, thinking it to be her ex-lover, she leaps up onto her feet, smiling and wringing her hands. But, to her disappointment, it’s her fiancé that has arrived. He’s come with ‘good’ news—they’re going to get married sooner than they had originally planned.

After Francis leaves, Elizabeth is about to go look for Ross, but she’s stopped by her mother. Elizabeth is reminded that she is (1) engaged, and that (2) Ross can offer her nothing but “poverty, uncertainty, and a dubious reputation.”

Ross’ former classmate George Warleggan, however, seems to think otherwise. For him, there’s something to be gained through Ross Poldark. He speaks with another scheming gentleman about Poldark’s ancient family name and how they should buy his friendship and use him to open doors. Warleggan has the look of a villain about him.

Elizabeth must have realized herself: Ross isn’t husband material. 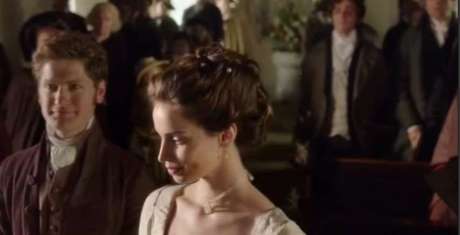 When the wedding day arrives, Ross is forced to attend. And as he watches his former sweetheart exchange vows with Francis, Ross remembers the days he and Elizabeth had once spent together. 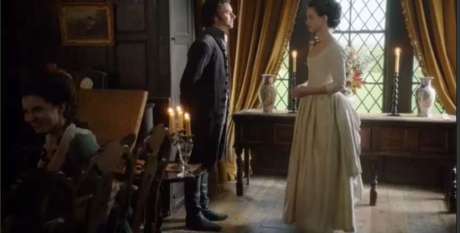 Shortly after the wedding, Elizabeth finally has the opportunity to speak with Ross. She apologizes for not having waited for him, but tells him that three years is a long time to wait–especially when everyone thought he was dead.

Throughout her explanation, Ross observes her coolly, as though he doesn’t give a damn.

However, in the next scene, we see Ross binge drinking to numb his misery, and staring down at the ring Elizabeth had given him. He still loves her, but has now lost her. Weaved in with this moment is the scene of the aged Aunt Agatha Poldark looking into the Poldark fortune:

The dark Poldark or the fair?
‘The stronger rises’ as the weaker falls.
For all is fair in love and war.
.

Seeing a crowd ahead of him, Ross approaches and discovers that people are waiting to watch a fight between the fierce Dog #1 and the whimpering, gold-furred Dog #2.

As the dogs are about to fight, someone shrieks, “Hey, that’s my dog!” referring to the frightened Dog #2. Pushing through the crowd is a boy, who looks desperate to rescue the dog. The men push the boy about, then toss him to the ground.

At once, Ross steps in and tries to stop the bullying, but one man interferes. Ross ends up striking the man with his walking-stick (Ross has a wounded leg and needs it to walk).

Elizabeth, who also happened to be present, sees Ross’ violence and looks away.

Ross reaches down to help the thin and filthy boy.

“Have they hurt you, child?” he asks.

Ross takes her to an inn to give her a warm meal, and as she wolfs it down, he asks the people lingering around: “Anyone know this child?” We learn that the girl (Damelza) is Tom Carne’s daughter from Illugan.

Elizabeth enters the inn to tell Ross that he did good in rescuing the child, but looks hardly pleased to find that the ‘boy’ is actually a woman. 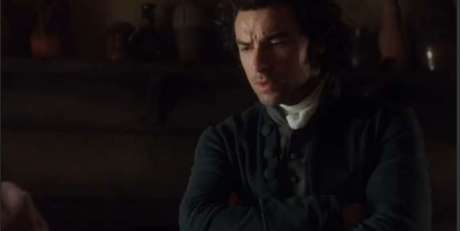 After Elizabeth leaves, Ross returns his attention to Damelza. Because her shirt is too large for her, it droops at the back, revealing some pretty bad scars.

Ross: They did hurt you.
Damelza: Not they.
Ross: Then who?
Damelza: Father.

Ross proves to be a kind-hearted man; he not only offers to take Damelza home, but half-way through their journey, he tells her he’s in need of a kitchen. He is offering her an opportunity to live a life away from her violent father. She immediately accepts the offer, but only if Ross will let her take Garrick with her (Dog #2). He agrees.

Ross’ decision to employ Damelza stirs up trouble. When Ross meets Elizabeth, she warns Ross that he needs to send Damelza back, as people are quick to judge (people might mistaken Damelza for his mistress). One also gets the sense that Elizabeth is jealous.

(And Elizabeth has every reason to be jealous, if that is the case. Damelza, after a good scrub, turns out to be a pretty young woman). 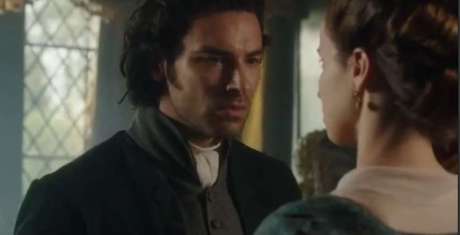 Anyway. As Elizabeth and Ross are alone, Elizabeth asks him if he hates her for marrying another man. This opens up a wound, and Ross tells her the truth—that he has always loved her. He draws close to her and asks if there’s really nothing left between them now.

She clings to the excuse that she’s a married woman. Ross is pissed and he storms away. (ugh, I hate love triangles!!!) 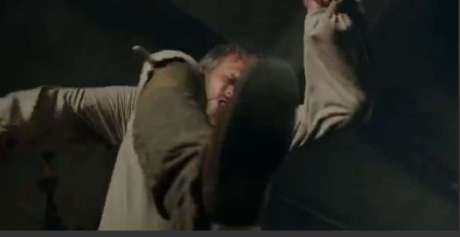 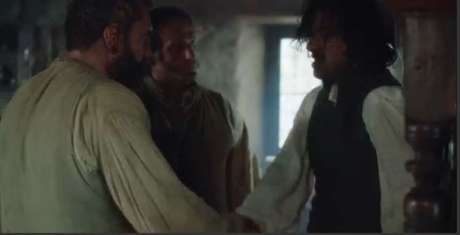 When Ross returns home, he’s greeted by an unpleasant surprise. Damelza’s father has arrived with his gang to fetch his daughter; it’s a matter of honor. But Ross refuses and gets into a fist fight. Ross wins in the end, and the men all shake hands. I guess they respect Ross for being able to fend for himself.

Damelza, all the while, is hiding inside the liquor cabinet. But Ross, not knowing that she’s within hearing, says “[Damelza] appears to be more trouble than she’s worth.” Hurt, Damelza packs up, takes her dog, and decides to return home. 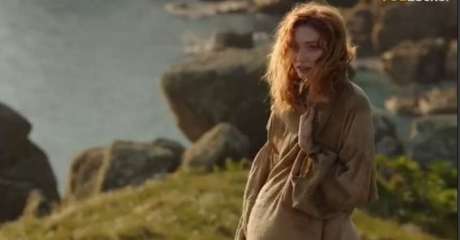 But on the way, she bumps into Ross. She never wanted to leave him in the first place, so when he offers to take her back with him, she joins him on his horse. 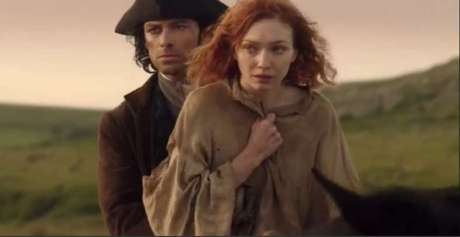 On their way home, they meet Elizabeth. She has heard the rumor that Ross is planning to leave Cornwall (Ross’ uncle, afraid that Ross might steal Elizabeth’s heart away from his son Francis, is trying to convince Ross to leave), and she begs him to stay, reminding him that Cornwall is his home. But Ross surprises her.

Ross: Where did you think I was going?
Elizabeth: To London. Your uncle said…
Ross: My uncle’s mistaken.
Elizabeth: Then what are you doing?
Ross: I lost sight of something. I came in search of it. Having found it, I’m going home.

Ross says this while Damelza is practically in his embrace. Hmm…

First Impression: It’s surprising how similar the adaptation is to the book. The only big difference is that Damelza in the TV show is a teenager/young woman, whereas in the book she first meets Ross when she’s only thirteen. While the 13-year-old Damelza was so much more adorable and funny, I’m not complaining. I’m GLAD she’s older in the adaptation. It’s less awkward to imagine them as a romantic couple that way.

So far, I’ve watched up to episode 3. And as a fellow period-drama-enthusiast told me: this show has the Jane Eyre vibes. You have the brooding hero, a young woman wiser than her age as his romantic interest, and the moody backdrop. Oh yes, and there’s the ‘other woman.’

But while the show (so far) has a bit of the Rochester-Jane vibe, it hasn’t captured the emotional poignancy or depth present in dramas like Jane Eyre (or North and South, Persuasion, Outlander, etc).

Anyway, I’d still recommend this show to any lover of period dramas. The scenery of Cornwall is stunning, the chemistry between the leads has an Outlander-ish-sizzle, and we’re given an interesting look into the business of mining. I think it’s a decent enough show, though not a great one in my book. We’ll see. My opinion might change as I watch more episodes—and yes, I’m intrigued enough to watch more. There’s enough romance and intrigue to keep me hooked.

(Is it just me, or does this look like a scene snatched out from a historical romance): 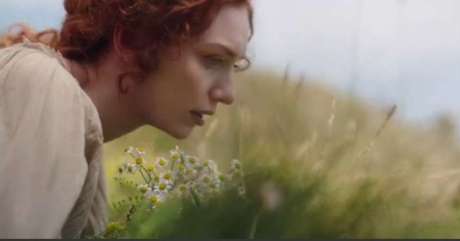 8 thoughts on “POLDARK (Episode One): My First Impression”

*Signup Form for THE RED PALACE eARC*
Pass pages of THE RED PALACE arrived in my inbox this morning and I am ECSTATIC.
Hwani and Maewol from THE FOREST OF STOLEN GIRLS by Leeann/Cube 🥺💕
I asked in my stories for IG post prompts and I received so many! I'll be answering them one by one, and the first question is: Resources about Ancient Korea (and I'm going to assume the writer is searching for English resources).
🔊 Sound On
Happy Book Birthday to @joanhewrites!
'The Forest of Stolen Girls' OutApril 20, 2021
Published!
Loading Comments...
Comment
×
%d bloggers like this: